A report published Thursday by Christian Aid, a U.K.-based charity, found that 2018’s top three most expensive climate-driven events worldwide took place in the United States. They were hurricanes Florence and Michael, followed by California’s wildfires.

With 12 distinct billion-dollar events tallied so far in the U.S., 2018 also ranks fourth among the years with the greatest number of billion-dollar disasters, according to NOAA’s National Centers for Environmental Information. All of the top four years in terms of extreme weather event costs are recent — in addition to 2018, they are 2011, 2016 and 2017.

This is no coincidence: we have more expensive stuff in harm’s way and climate change is super-charging storms. As a result, extreme weather is happening more frequently, and the damages that go along with it are increasing. 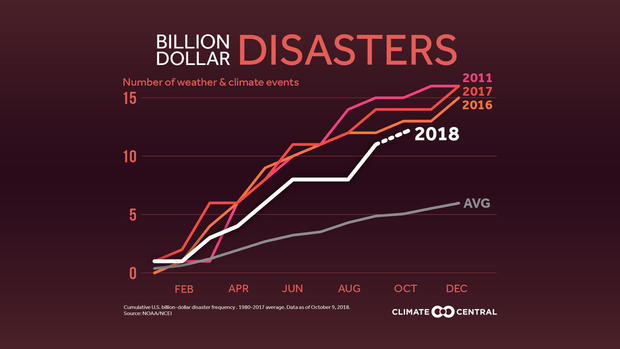 The Christian Aid report focused on 10 of the most destructive weather events around the world in 2018. Topping the list were hurricanes Florence and Michael, costing an estimated $17 billion and $15 billion this year, respectively.

It said the disasters noted in the report “are not normal: they were worsened or made more likely by climate change, or both.”

It also said they are not “the new normal.”

“There will not be any new normal as long as greenhouse gas emissions continue to push up global temperatures – extreme weather events will constantly become increasingly common and more extreme,” it said.

Here is a look back at hurricanes Florence and Michael, as well as some of 2018’s other memorable weather and climate events in the U.S. — and their costs:

Florence, at one point, was a Category 4 storm with winds of 140 mph. By the time it made landfall on September 14, however, it weakened to a Category 1, and its slow speed at that time is what defined the hurricane.

The damage is estimated to be $17 billion, according to Christian Aid.

Michael will be remembered for ferocious 155-mph winds in its core. Energized by above-normal water temperatures — in the low to mid-80s — over the northern Gulf of Mexico, the storm rapidly intensified 80 mph in just 48 hours. When it made landfall, it was still intensifying and almost became a Category 5 — the strongest of hurricanes.

In total, damage estimates for the storm are between $15 and $25 billion, according Christian Aid and Bloomberg News, respectively.

New studies show that warmer water caused by climate change is likely to fuel a greater number of Category 4 and 5 storms.

For the people of California, the state’s deadliest and most destructive wildfire season on record will remain burned in the memory of residents. Close to 1.9 million acres have been ravaged, placing it ahead of the historic 2008 season, which burned 1.6 million acres.

California wildfires are caused by an ignition, either natural or human caused, combined with very dry, warm conditions and bursts of gusty down-sloping winds. These conditions are present almost every fire season, and that was especially true in 2018. But as the climate changes, scientists have found that fire season is now almost three months longer and the number of acres burned in the American West have increased dramatically since the 1970s.